You will leave this one-day class with a whole new service to add to your menu as well as 15 & 30 minute add-ons. Thai Foot massage is a simple yet powerful way of applying reflexology. You do not need to be an expert in reflexology to perform this modality AND you won’t wear out your thumbs because there is no thumb walking!

Jill Burynski is an internationally recognized teacher of Thai Massage and 2018 inductee to the World Massage Hall of Fame. She has taken seven journeys to Thailand since 2003 and has studied at the Old Medicine Hospital, ITM, & with Pichest Boonthume in Chiang Mai, Thailand. She founded Living Sabai in 2009 which offers Thai Massage CEs, certification, and Thailand Study Abroad opportunities. Jill resides in Asheville, NC where she also owns Town Mountain Massage Therapy. 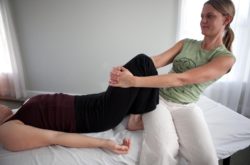 Thai Massage for the Table

Amaze your clients with Thai Massage. Learn how to incorporate Thai Massage into your table sessions. This class is great for those interested in practicing Thai but cannot or don’t want to practice in the traditional floor style or for those that want an introduction to Thai Massage. Read more… 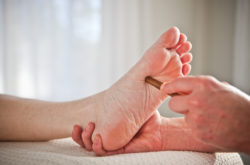 You will leave this one-day class with a whole new service to add to your menu as well as 15 & 30 minute add-ons. Thai Foot massage is a simple yet powerful way of applying reflexology. Read more… 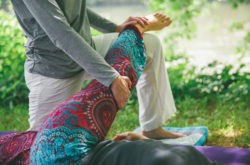 In this three-day course you will learn how to perform a traditional Thai Massage in the supine and prone position plus the key to career longevity and satisfaction. Read more…

Thai massage works the relaxing effects of massage, the stretching of yoga, and the spiritual wellness of energy work into one session. The modality is more physically dynamic than a typical massage. Sessions are performed on a floor mat with the client fully clothed. The practitioner helps the client through yoga-based, assisted stretches while pressing on energy and pressure points along the body. Because of it’s similarity to yoga, some people refer to Thai massage as “Thai yoga massage” as well.

Along with teaching the modality as a whole, Thai massage training can teach you how to improve your flow with better sequencing, incorporate the classic Thai herbal balls or start using your bare feet as tools. You can also learn how to adapt Thai techniques for table massage or work with special circumstances like pregnancy and disabilities.

All Locations
| Classes Near Me

A modern gem in the midst of North Carolina's historical charm, Charlotte is one of states's fastest growing cities. Its distinct neighborhoods bring incredible museums, a thriving art community and family-friendly attractions together alongside a NASCAR speedway and some of America's most beloved sports teams.

Charlotte's success is built on the back of the banking industry, and its new buildings and progressive attitude gives it an undeniable "city of the future" atmosphere. An extensive public transit system makes it easy to get around on foot, but be prepared to pay for that big city feel. Charlotte is less expensive than other major hubs, but factor trips to upscale districts like Dilworth and Uptown into travel budgeting.